In a recent study, more than 70% of millennials have reported feeling like they’re “faking it” and still barely making it, otherwise known as Imposter Syndrome. This psychological phenomena, which is described as intense feelings that achievements are undeserved and will likely be exposed as a fraud, was first discovered in the 70s but has hit our generation particularly hard with the advent of social media.

Technology is growing at such a rapid pace that most of us trying to grasp onto new information on almost every project we work on. And that can make you feel like you don’t have the expertise you should. Meanwhile, your LinkedIn pages make it seem like everyone but you has this thing called life all together. However, odds are you’re perception isn’t aligned with reality.

Imposter Syndrome, like any other debilitating disorder, is cyclical. Here’s the typical process:

It can be tough to deal with but there’s a light at the end of the tunnel. Here are four tips to powering through Imposter Syndrome: 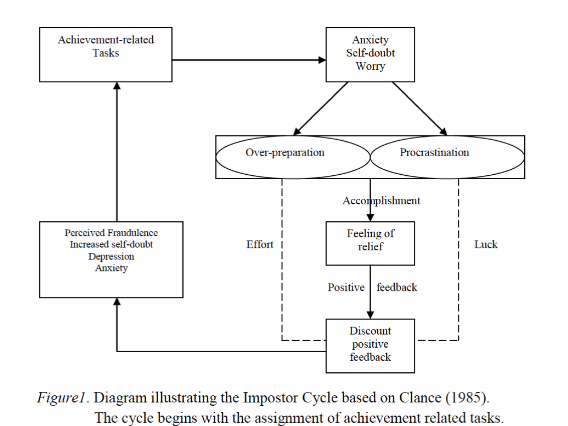 Tip #1: Stand in your awesomeness.

Compliments are hard to come by. If one is doled on you, accept it wholeheartedly. Although you may think that rejecting the compliment would be perceived as endearing modesty, it can also come off as a negative self assessment. Believe the truth in the positive recognition, say “thank you,” and build on that.

Tip #2: Identify what you bring to the table, then take a seat.


Before succumbing to anxiety, when faced with a new challenge, think about the actionable steps that can be taken to solve or improve it. Follow up by writing them down. According to studies, putting intangible ideas on paper tricks the brain into thinking they’re more real than if they just remained a thought in your mind. A recent Harvard University study tracked students that admitted to either writing their goals down or not and researchers found those who committed the goals to paper achieved 83% more of them than the other group.

By writing down your achievements, eventually you can lead your mind to actually believe that you’re deserving of the praise that follow them.

“Comparison is the death of joy.” -Mark Twain

Mr. Twain was onto something. Our sickening attachment to social media makes comparing our lives to friends, foes and strangers entirely too easy. And because of that, we’re usually the worse from it. There are some instances that comparison allows for someone’s success to amplify your own ambition, but in large doses, it can dampen the perception of your own accomplishments.

What we all need to continuously bear in mind is that social media is merely a highlight reel of people’s life moments they choose to share. A good portion of the hardships they face, which are much like yours, will never be seen.

Tip: #4: Keep the great things people say to you front of mind.

Every ‘thank you’ e-mail, congratulatory text, check-in phone call–keep track of them and revisit whenever feelings of inadequacy start to creep up. Let them serve as simple reminders that others appreciate your abilities, so you should too.

How to Turn a Million "No's" Into a Solid Yes

How One Turned a Tragedy Into a Successful Clothing Line