The older I get, the more I realize that there’s purpose connected to our painful experiences. A lot of times those growing pains prepare for the next level and the same could be said for rising gospel singer, Phil Thompson.

After years for songwriting for others, he took a leap of faith and began writing and performing his own music, thus launching his solo career. While being in front of the spotlight is completely out of his comfort zone, God is using him to change the lives of many.

“My Worship” is currently #39 at radio (Media Base) and continues its climb. As the full project was birthed in his darkest hour, Thompson stands amazed by how God worked his pain into purpose and the pure, authentic, worship music that is now being consumed by worshipers all over the world.

MADE caught up with Phil to talk his journey from being behind the scenes to in the spotlight and why his worship is so much more powerful than his pain.

MADE: How did you get your start in the music industry?

Phil: I discovered this songwriting gift when I was 30 years old. I was a gym teacher at the time, and I was trying to decide whether to continue teaching or to go into real estate full-time. As I was praying about it, I remember having a conversation with my older sister Theresa, who is a pastor. She had just preached a message about finding one’s purpose, and suggested that I think back to my childhood to find it. She then challenged me to write a song.

I did that and discovered a gift. I fell in love with it and began to teach myself to play instruments to support it. I was writing songs just for the love of it. One day my father asked me and three of my siblings to sing a song before he preached at a revival. While we were singing, everything clicked. We soon after formed a group called Ashmont Hill. After a few years of making demos and waiting patiently, we were signed to a small church label. We made three albums on that label before I felt called by God to do a solo, independent project.

MADE: Who are some of your biggest influences?

Phil: I’m one of eight siblings. When I was a kid, my father did not allow any of us to listen to secular music. We were only allowed to listen to music about Jesus. So, I grew up on the Clark Sisters, the Winans and Commissioned—just to name a few. These are my biggest influences by far. Their music is so timeless. I love timeless music. Music that is still relevant, no matter what generation listens to it.

As a songwriter, my biggest influences are Kirk Franklin, Fred Hammond, Michael Gungor, and Leeland Mooring to name a few.

MADE: How would you describe the season that you were going through as you worked on the album?

Phil: That’s a great question. I think the first thing that I would like to say is, God gives me songs in different seasons of my life. These songs that he gave me during this season comforted me. I continued to write from a broken place because the process was healing and lethargic. Releasing these songs as a solo project was not a thought in my mind or my focus at the time.

The season was incredibly cloudy. I couldn’t see anything. And I couldn’t feel anything, especially the Lord. I’d only feel Him when I wrote songs and sang them. I was married for 16 years and filing for divorce was the toughest decision I’ve ever made in my life. It really felt like a death sentence and the ensuing court custody battle broke me to my core. So, I think cloudy is a great adjective to use during this season because I felt like I was blindfolded and helpless—which is why I leaned on the song “Light the Way” so much. I really felt at the time that the Lord was giving me these songs just for me. To help pull me through this season. So the fact that the world is being blessed by these songs is mind blowing.

MADE: You help lead people into God‘s presence. How do you encourage yourself during those tough moments? Who encourages you when you need it?

Phil: I know this is going to sound super cliché, but worship encourages me. The Bible says to put on a full garment of praise for the spirit of heaviness. I know that spirit very well. Worshipping God is a present time. I’m not focused on my past, or looking into my future with concern. I’m just in the moment, worshipping God and it changes my perspective. It changes my emotional mood. It changes my behavior. Worship is a game changer for me. I don’t care what kind of mood I was in, after singing “Light the Way” for example, I feel hopeful and charged. Like going from Bruce Banner to the Incredible Hulk. Thank God I have a great support system. I’m one of eight siblings and my parents are amazing. They have been married for over 50 years. So, my family is extremely supportive. 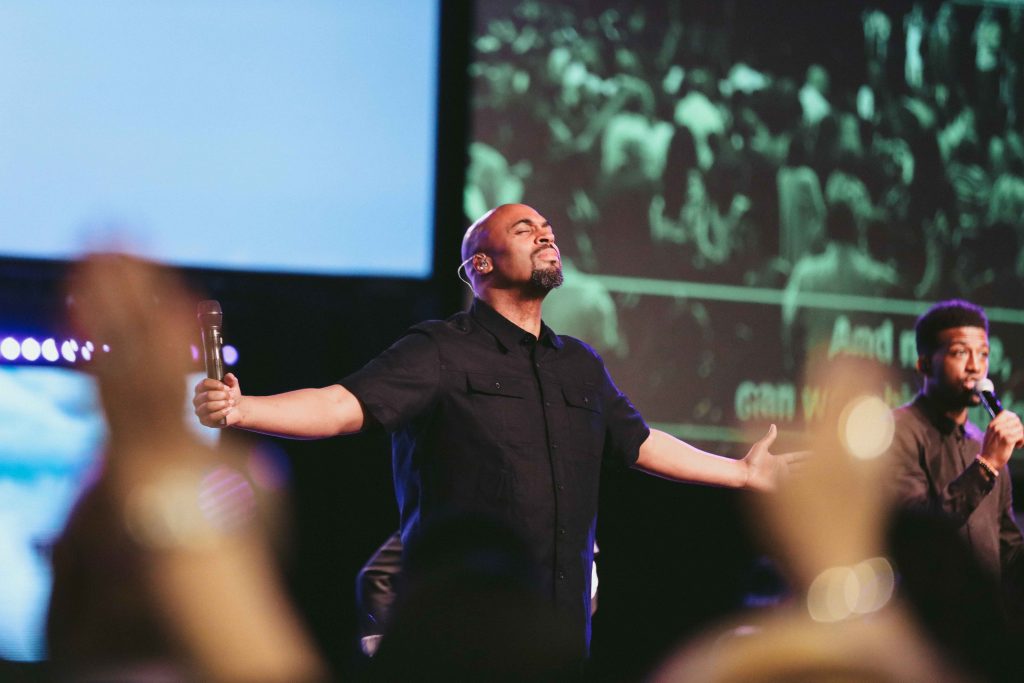 MADE: In your opinion, how are pain and purpose intertwined?

Phil: There’s a lyric in my worship that says, “For all the things you’ve done for me, no one can worship you for me.”

Had I not been through the storm, I would’ve never been in the mind-frame to think of or write that lyric. That in itself is a perfect example of pain and purpose being connected. So, as I look over my life with perspective, I know without a shadow of a doubt that I would not be walking in this purpose without the storm. The Lord used my pain to catapult me into my purpose. So, at the end of the day, I’m grateful that the Lord is using me. Look at the story of Joseph—sold into slavery by his own brothers. Thrown into jail because he was accused of something he did not do, but ultimately became the ruler of all of Egypt. The Bible is full of these kinds for stories. Pressure makes a diamond, the heat from a kiln forges clay. At the end of the day the Lord uses the broken. He delights in the underdog.

MADE: Did you think your single “My Worship” was going to take off the way that it did?

Phil: So, at the end of the storm, I was in a grateful place. I remember looking over the previous three years and saying, “Thank you Lord for being with me throughout this entire storm—and I’m still standing.” While I was in that grateful place, the Holy Spirit dropped a thought in my mind that each person’s worship is as unique as their fingerprint. That thought inspired the entire song. I remember like it was yesterday. After I wrote it I called my oldest brother Pastor Andy Thompson, who founded and pastors one of the fastest growing churches in the world, World Overcomers, in the triangle area in North Carolina. I said to him, “Bro, I just wrote the best song I’ve ever written and I really think people are going to connect with this song. On a different level.”

But, I was not thinking it would be on the level that it is. What is happening is way beyond my imagination. I had no clue that it would happen on this level, in this short period of time. Every time someone asks me about it the only thing that comes to my mind is, “God is faithful.”

MADE: How difficult was the transition from working behind the scenes as a songwriter, to be thrust into the spotlight as a solo artist?

Phil: This is a great question! I never saw myself as a spotlight guy. I’m very introverted, very shy. I would fake sickness on presentation days in school. Standing in front of people was and always has been my biggest nightmare. I’d much rather be somewhere in the background, or somewhere in the corner. The first time my brother asked me to lead worship, I remember laughing and saying something like “Are you kidding me? That will never happen! And I think you know that!”

But somehow I’m here. And I still feel as though I don’t belong from time to time. That’s why every time I take the stage, my prayer is the same thing. “Lord, take center stage! That you would be seen and glorified. Let it not be about me, let it be all about you.”

This prayer works for my psyche because if I have to perform, I’m not interested. There are people who are legitimate performers and are so gifted at it. I don’t believe that I’m one of them. So, if the Lord doesn’t show up, I’m in SERIOUS trouble. 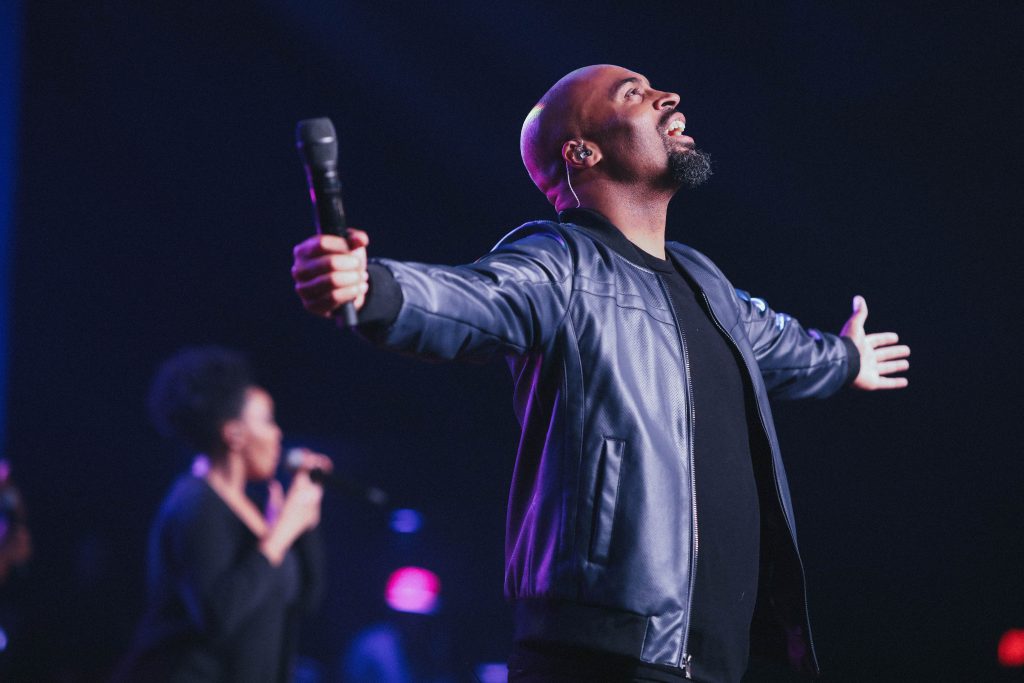 MADE: What advice do I give to those who are in a transition season, trying to persevere with the fear of uncertainty? Also, for someone looking to step from behind the scene into something different and new?

Phil: Fear is a real thing, but God hasn’t given us that spirit. So, if you’re dealing with it and it isn’t from God, then please be knowledgeable about where that spirit comes from. The word says that we are overcomers by the blood of the Lamb and the word of our testimony.

Everything we’ve spoken up until now, has created the reality that each of us live in. The point I’m making is to be cognizant of this fact. The power of life and death is in our tongues. Speak life. Not death. Speak what God says about you. Trust me, I know that all of this is easier said than done. But I have learned how to not speak during bleak situations, because of this very fact. If you can’t speak what God says, then it’s better to just shut up.

I remember being in a songwriter conference years ago and I remember being frustrated about lack of opportunities for my songs. I sometimes felt as though I was writing all of the songs in vain. I was somewhat afraid that no one would ever hear of them. I remember one of the aspiring songwriters asking the panel “how do we get people to sing our songs? How do we get artists to record our songs? How do we make an impact with our songs?”

And, one of the writers on the panel had an extremely profound response. His response was, “Be faithful wherever you are right now. If you are serving your local church with the songs that you write, continue to do that, just be faithful. When you write a song that has wings, the song will fly on its own. So, there’s nothing you have to do on your own strength.” When I first heard that, I felt released and relieved. Such great advice that has rung true throughout the years.

How To Cope When Your Ambition Causes Anxiety