MADE by Ashley White

Before his breakout role on BET’s The New Edition Story, there was VINE.

His viral videos on VINE created a huge buzz on Instagram, but it was Woody McClain’s consistency and determination to posting great content on a digital platform that led him to opportunities of a lifetime.

When he’s not making videos or working on TV shows, you can find him in the studio with his production, Band Geeks (He played in the marching band at FAMU. Who knew?)

There’s so many layers to him—he’s hilarious, he produces music, he acts—so how does the multi-talented entertainer define himself?

“It switches like every other week,” says McClain. “This week I’m a creator. My brain is always moving. I can’t even put myself in a box. I can’t list myself as one thing because I do so many things.”

Here, Woody shares the keys to his success on social media and on-screen and how he’s creating his own lane in the entertainment industry.

MADE: How vital has social media been to your career?

Woody: Social media has been a huge help.  As millennials, we have access with to social media and digital [platforms], so we’re filming, directing, producing and acting in our own material on Instagram and YouTube. That’s giving us a platform to really learn and perfect our craft. Also, getting instant feedback from real people saying, “That’s trash. Never do that again,” or “We love it. Keep doing more.”

MADE: So what’s the formula to success on social media? How can a person take their career to the next level?

Woody: I would say whatever you do, be consistent with it. If you’re a chef, make sure you’re always posting and uploading [content] that’s chef worthy. I come from a comedy background. Everything I do is true to me. It’s funny to me, so it’s not forced. I don’t have to force comedy because I do things that I naturally think are funny.

MADE: How did you get started doing videos?

Woody: I got started through my friend Slack. We went to college together at FAMU and when I moved out here, he was the one who said, “Yo, you should start doing VINE videos.” And I was like, “What?” He said, “These six-second videos, I think they’re super dope. I think they’re going to be the next wave.” I kept brushing him off for like a whole month. I finally got on my FB page and I’d seen one of his videos had like 12 million views. The next day I hit him and was like, “Bruh.” He was like, “Yeah, what’s up.” I said, “I gotta be in the video. Teach me your ways!” (laughs) From there I just kept getting better and better.

MADE: How do you know when a video will go viral?

Woody: The thing is, you never know what’s going to go viral. I used to have videos and I’ll say, “Yo, this shit is about to kill the internet.” Then I would post it and it wouldn’t do anything. Like, I spent a week editing this video and doing all this stuff. Then I’ll do another video and be like this video is kinda trash, but I’ll post it. Then the next day, it’s gone viral. So, you really don’t know what’s going to go viral. It just does it on its own.

MADE: What advice would you give to people about handling the pressure of social media?

Woody: I’m going through that right now. How do I handle that pressure? I just get away. I get out of my head. I just recently got back from South Carolina. Charleston is where my family is and just being around my family and not even thinking about it, things will just come to you naturally. Just being around real people, people who support you, people you love, you’re going to get a whole bunch of dope situations from them.

MADE: What projects do you have coming down the pipeline?

Woody: There’s Stories with Kev. It’s basically like the video that went viral,  but it’s in TV show format. We’re bringing the first season on his Laugh Out Loud Network coming next month and we have 12 new episodes.

MADE: You’re working with Kevin Hart–that’s so dope!

Woody: Everytime I see Kevin, he’s such a great person. I remember when we first posted that video, the next day his people contacted me saying, “We have to meet, we have to link up.” So we went to his office and we met with Kev. He’s a super professional guy. Every time I see him, he tells me to stay grinding and that the only person who can mess up my career is me. [He says] don’t fall into any of the nonsense that’s out here. Just keep grinding, keep God first and keep pushing.

MADE: Who are some of your biggest influences?

Woody: My biggest influence has to be Eddie Murphy for sure. That’s my number one. Number 2 is Will Smith and 3 is Mahershala Ali. I’ve been watching Eddie Murphy as a kid, and I just respect everything he does.  With Will Smith, I enjoy how he can do a comedy movie but he can also get serious and people take him serious for what he’s doing.That’s what I truly enjoy about his performances. Then there’s Mahershala Ali. I’m just getting hip to him, but he’s super dope.

MADE: Tell us about your episode on TALES.

Woody: My episode is based on “A Story To Tell” by Biggie Smalls. In the song, Biggie is saying he met a young lady but she was the fiancé of an NBA player. But I guess the NBA player wasn’t treating her right and Biggie met her and they ended up going back to her house and then her fiancé ended up coming home early. I can’t believe he made that song and it’s supposed to be a true story. It’s a whole new Woody that’s nobody’s ever seen. My character’s name is Slim and I’m really excited to see it.

The vibe on set was amazing. Irv Gotti is a ball full of energy. First time I met him was super dope he made everyone feel like family and that just makes you wanna go harder as an actor to make sure that his passion project does great things like how he envisioned it. When we were at the table read and then Jennifer Freeman walked in and I was like, “Wait a minute. I used to watch her on my Wife and Kids all the time! (laughs) Then they were like, Oh yeah, the first scene you’re shooting is a love screen. And I’m like Wait a minute. She doesn’t even know my name? 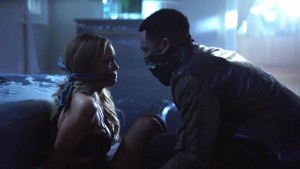 MADE: You have so many amazing things going on. How are you taking all of this in right now?

Woody: I’ve always been blessed to have really great people in my circle. I have my family who’s always supporting me and encouraging me back  home. I have my mentor Laila Odom. She’s always coaching me and making sure I’m on my grind and I’m not falling off. I have my castmates from New Edition—we talk every single day just motivating each other and listening to each other win. It’s always great to hear about my friends being successful. My brother Algee Smith has his project coming out so when he told us we were all extremely excited. Keith’s episode on TALES just aired. Luke James—I don’t even know if I can say the stuff he’s doing right now. Everyone is doing so good, it’s super dope.

The Underlying Messages Behind Formation

Paula Abdul: Inside the Heart of a Pop Music Legend