Music producer, Dot Da Genius, recently made the announcement that he and famed singer, Jhene Aiko are married, much to the surprise of their fans and generally nosey social media users everywhere. The marriage itself is not what’s capturing headlines. It’s the fact that in a society filled with narcissistic over sharers, the two managed to pull off the Herculean feat of doing what is now considered to be old school as h-ll, keeping their relationship between the two of them.  We could learn a  thing or two from the musical love birds. Here’s what I gleaned from the situation:

Although the timeline is a little hazy, stories have been swirling about the artists’ romance since early 2014.  It took the pair almost two years to go ‘public’ with their relationship. According to a Complex interview, when asked to explain if someone special was in her life, she said this:

“There is, but I’m single. Not by choice. Only because I found now that when I talk to guys, they’re wary because they know about Donald, they know I’ve worked with Drake. They’re always side-eyed, suspicious. But I’m loyal in relationships. If I’m your girlfriend, that’s it. I’m practicing to be your wife at that point because I treat it seriously. I feel like I was born to be a mom and a wife and totally domesticated.” 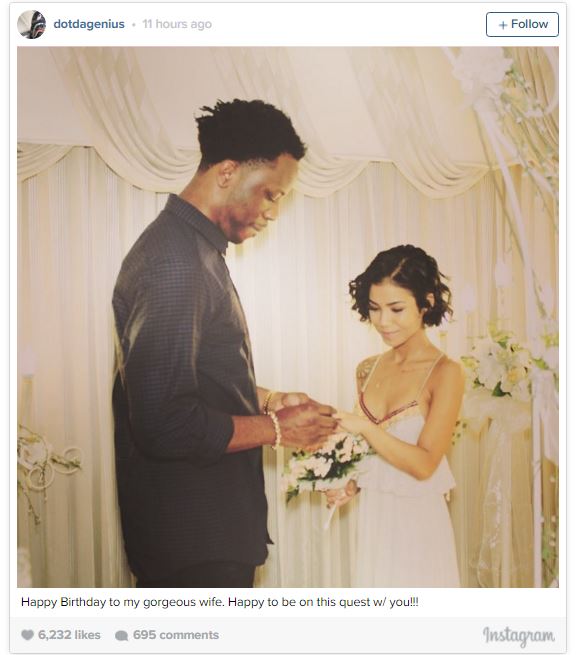 The Eternal Sunshine singer spoke of being for the small things in life:

Living on Sycamore street, and spend your weekends on the beach

We were free, to be everything we dreamed

On over hill, and dare our heights

It seems as if she’s walking her talk, judging by the beautiful yet simple wedding ceremony depicted in the above photo that would make minimalists everywhere rejoice. I’m assuming the same ‘no muss, no muss’ approach is taken when it comes to the way she handles her man as well. Focus on the love and the rest will simply fall into place.

3. Keep folks out of your business.

Ahhhh yes. Perhaps the biggest #MajorKey from this situation is the tried and true yet rarely practiced act of discretion. It’s difficult enough to nurture a successful relationship without having to sift through the biased and often empty opinions of others, no matter how ‘good’ their intentions are. The couple has seemingly been living and thriving in their little bubble while keeping intimate details about their union mostly private. Take notes, kids.

The Gift of Gab: Top Radio Personalities in Hip Hop

DeVon Franklin: ‘Learning to serve God taught me how to be successful’

Power’s Omari Hardwick Is Adding “Rapper” to His Resume