If she looks familiar, it’s because you’ve seen Imani Hakim on the hit series, Everybody Hates Chris, playing Chris Rock’s little sister Tonya. Today, Imani is learning how to navigate the entertainment industry as a young woman and discovering her passion as a creative. Check out this exclusive interview with Imani as she discusses her upcoming documentary and how she’s enjoying her journey of self-discovery.

MADE: When did you know you wanted to be an actress?

Imani: I originally knew around the age of seven. I first started with writing my own projects and writing my own plays and scripts. Then I would cast my cousins to play the supporting roles. I would be starring in it, directing it and all of the above, so that’s how I got my start in just dibbling and dabbling into it. But, my big break as far as breaking into the industry was with Everybody Hates Chris when I was 11 years old. That was pretty dope because I was only out in LA for about two months and I booked that role. My very first gig was a TV show so I was pretty lucky.

MADE: From the outside looking in, it doesn’t seem like you had a hard time making the transition from child actress to adult. Would you say the transition has been relatively easy for you?

Imani: Nope. (laughs) Well, in a sense but I think there’s different levels to this business and industry. I also think that I was blessed and lucky enough to deal with a lot of my things privately instead of in the public eye. I’m still transitioning and I’m still finding what works for me as a young adult. I’m in a really interesting age group now because I’m 24 but I look really young still. I’m figuring out that new wave where I’m trying to figure out if I want to start playing my age now or if I want to keep playing down and just figuring out where I fit. It hasn’t been the roughest transition but it hasn’t necessarily been the easiest. We’re figuring it out, we’re riding the wave and we’re taking it one day at a time.

MADE: I appreciate your honest answer because a lot of times we feel like we have to have it all figured out or have it all together.

Imani: Especially when you start something at such a young age, there’s that pressure to have it all figured out just because you’ve experienced it early on. I experienced success at a young age so I did feel that pressure to have it all figured out or feel like I know exactly what I where I want to go, what I want to do and how I’m going to get it—but that’s not how life works. You have to go through certain things in order to really figure out where you’re supposed to be. Sometimes we think we’re not to supposed to be where we are or like that’s not a part of our journey. I think that’s part of the growing experience—to fall and fail and it will land you on a new path. 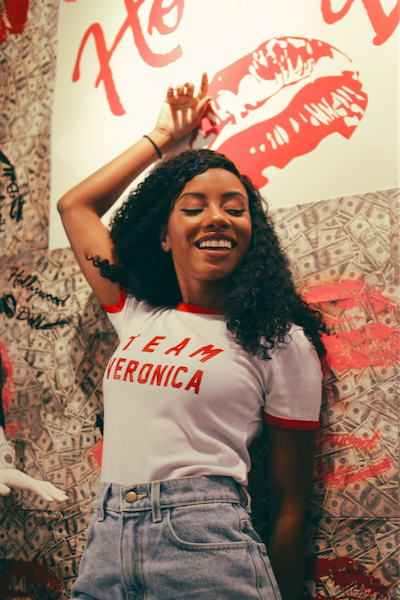 MADE: That’s so true because people will ask, “Where do you see yourself in 3-5 years?” and it’s like, I honestly don’t know.

Imani: Yeah! People ask me that too and it’s like I’m 24 and I’m learning new things that I’m passionate about for instance with writing for me that’s how I got started in a way and now it’s showing back up again where I’m writing and I’m like, “Oh wow, I kinda forgot my love for writing.” So who knows—maybe one day I’ll really dive into that and maybe that will be my main focus or maybe not. Just because we started one way doesn’t mean we’re going to end that way as well. I think we put way too much pressure on ourselves or we put ourselves in a box because that’s what people know us as so we think we have to live up to that. Life is all about discovery and going on a journey. It could be completely different from where we started.

MADE: We’re only a few minutes in and you’re already giving us a word! Let’s switch gears. I was on Instagram and I saw that you’re working on a documentary for survivors of sexual abuse. Can you tell me how it came about?

Imani: Yes, I can. It’s something that I’m very passionate about. I’m a survivor of sexual abuse and so it hits very close to home for me. I noticed that in the black community, it’s not something that people talk about a lot. No one ever faces it, no one ever talks about the trauma that comes with it. So I wanted to be that vessel in a sense of opening up the conversation because we have the #MeToo movement going on, which is nice and I respect it but I think there’s a demographic missing from that conversation so that’s what inspired my documentary that I’m working on. Because I want to create a platform for those people who are not being heard. To have a voice and speak their truth.

MADE: Was it always easy for you to be open about your experience with sexual abuse?

Imani: No. It was definitely not easy for me. It’s not something you lead a conversation with. Honestly, a lot of my friends did not know until recently. There’s so many factors that goes into it. There’s shame and guilt on your part, disassociation and all that stuff that comes with it so it’s not a easy subject to speak about. Honestly, I just left a meeting pertaining to the documentary and I said to my director and producer, “This is so freeing for me to keep talking about this.” I can only imagine what it’s going to do for others when we actually release this project because I didn’t talk about it for so long. Now, I’m in a position where I’m working on something that I’m passionate about and I’m talking about it and every time I talk about it it’s bringing up new discoveries and emotions for me. It’s so freeing when we open up to the people that we love because we’re afraid of being judged because it’s something that we went through and experienced. But yeah, it wasn’t always easy but it’s definitely getting easier now and I look forward to talking about it now because there’s power in this truth and I think when we go through something like this we think it’s a weakness or something to be ashamed of, but it’s not. I think everything happens for a reason and for me to experience that, I don’t think it was meant for me to keep that in the dark. It’s meant for me to take it and shed some light on it and make it into a positive thing and that’s what I’m here to do.

MADE: That’s so awesome. I admire your courage to not only share your story but to empower others to do the same. What’s your creative role in the project?

Imani: I was going to direct, but I realized that was a lot. So, basically the concept is for me to be interviewing other survivors and that’s when I’ll be sharing details about my experiences. Until the release of the project, I’m going to be keeping [my experience] under wraps. I’ll be letting people in publicly for the very first time.

Imani: I’ve been getting that a lot lately and it’s so freaking cool for me to hear that because no way was I ever like this before. I think it’s one of those things where I really wanted to get to know myself and I think with the sexual abuse and all the pain and trauma that comes with it,  you really start to dislike yourself. You don’t like looking at yourself in the mirror when some stuff like that happens, but I made it a goal. I said to myself, “Girl, you are going to love yourself and you are going to love yourself unconditionally. You’re going to love yourself no matter what what shape, form, wherever you are.” It’s about me accepting who I am right now in this moment, no matter what is happening, no matter what I’ve experienced because we put so much judgement and pressure on ourselves when life happens but I just made it a goal for like I’m literally going to love my acne, my acne scars, I’m going to love my teeny weeny fro in the process, I’m going to love my stretch marks or whatever. I’m going to the fact that I have a temper or I’m going to love the things that we categorize as flaws and I’m still going to love it and I’m going to tell myself to love it throughout this journey. I want to show other people that hey, I’m doing this with you. We’re all going through this trying to figure out who the hell we are and what we’re doing and I want to showcase that. If you’re going to follow me on Instagram, I want you to see the real thing. This is part of the real thing, me discovering new things about myself and falling deeper in love with myself no matter where I am. 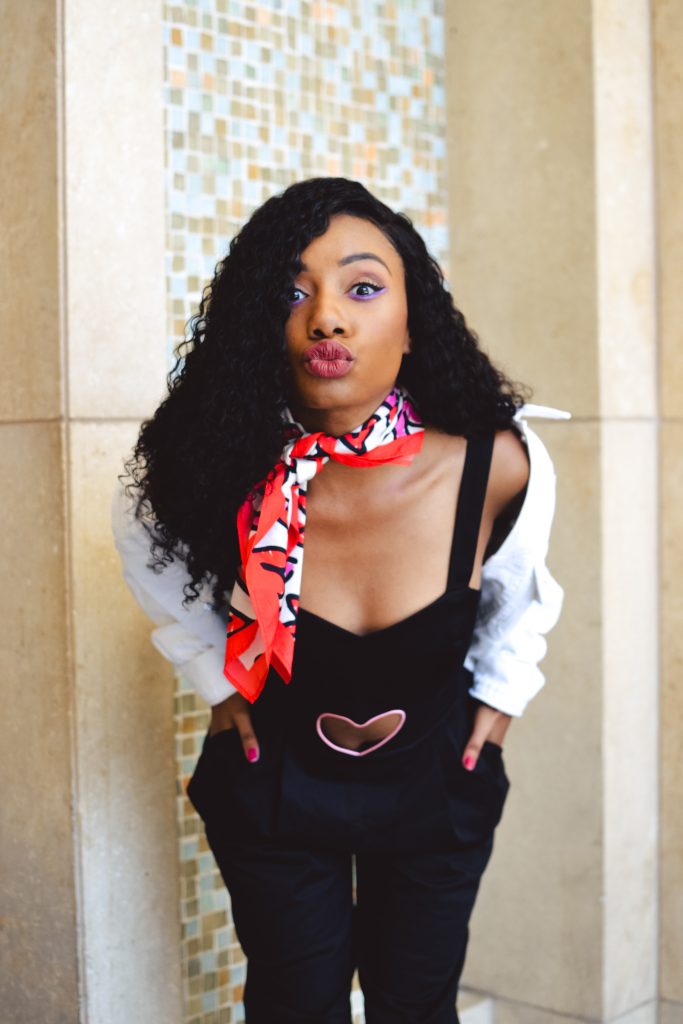 MADE: It’s so refreshing to see someone be so honest because we live in a world where everyone wants to stunt for the ‘Gram. We wish more people would just be honest.

Imani: Yes, be honest. There’s so many people out there trying to stunt for the ‘Gram and I see everybody trying to show off and I said the goal here is to be as real as I can be. Everyone assumes you’re living some type of life or that you got it all together just because you’re on TV. And no, I think people forget that oh these people that we’re watching these entertainers—that’s what we are. We’re entertainers. We’re also human beings with insecurities and problems and family issues and financial issues and whatever. All of that stuff is still there, so I’m not going to sit here and act like I’m caught in Beverly Hills every day. That’s not the life that we’re living, we’re going to keep it real. It’s a real life outside of the TV and career that you guys are seeing.

MADE: What advice do you have on staying true to yourself in the entertainment industry?

Imani: We’re an industry that’s all about looks and I would say that to young creatives to just know yourself and tell yourself right now before you get caught up in anything that you are enough the way you are. I think a lot of people join this industry and think they have to change and mold who themselves to become something else that you know exactly how you’re supposed to be right now and just bring that to whatever you’re doing.

Laurieann Gibson Goes ‘Beyond the Spotlight’ on Lifetime